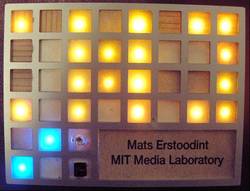 First up is Dr Joseph A. Paradiso from the MIT Media Laboratory, with a presentation titled ‘Smart Spaces’. What follows is as liveblogged, although this room doesn’t have Wi-Fi, so I’ll be posting it as one piece when I get out.

Anyway, Paradiso is from the Responsive Environments Group at MIT Media Lab, and he’s going to talk through its coolest projects. He starts by quoting Marshall McLuhan, on the idea of ‘electronic media (aka television) as an extension of the nervous system’. But Paradiso says nowadays, it’s not just TV, but all kinds of sensor networks and devices – “the world of electronic sensors connected to the world of humans” as he puts it.

At this point, nobody is really buying these things – ubiquitous computer sensors – but they will buy devics, toys, home security systems, utility devices and so on, and many of these now have sensors inside them. So they’re capable of sensing more about their environment and how they’re being used.

So, Paradiso’s group at MIT has been working with power strips (plug multisockets, to us Brits). They’re dotted around homes and workplaces, and Paradiso says they’re ideal base platforms for hosting a sensor network. So they built a concept design (pictured) with power sockets, USB 2.0 ports, a wireless tranceiver and other stuff.

They built 35 of them, and spread them around the MIT Media Lab, and started by getting the devices to track motion and sound, tracking the rhythm of the lab. I should jump in now with a wildly generalised ‘HELP! YOUR PLUG SOCKETS WILL SOON BE SPYING ON YOU!’ bit of scaremongering. If I don’t, someone else will after all…

Anyway, back to Paradiso. He’s showing lots of graphs showing how these devices can track what people are doing by tracking motion, lighting etc. So what can be done with this data? The most compelling one, he says, is thinking about how data from the real world can affect virtual environments.

MIT has a concept called Dual Reality, where these sensor networks are like wormholes, blending together the real and virtual world. Stay with me, people. It’s about “being able to browse the real world in these virtual environments”.

Paradiso says his team have focused on Second Life as the subject for their experiments. They built a model of the MIT Media Lab within Second Life. It’s got the real-world sensors in there too, with plumes of smoke rising up according to how much power is being used in that device.

Oh, so yes, it’s feeding real-world data into Second Life, to make stuff happen. One student has himself wired up to a device tracking signs of stress – and if he gets stressed, his avatar’s hair goes mad, like Robert Smith on an extra bad hair day. They’re just demos, Paradiso says, but they show the potential.

Now he’s onto a separate experiment, turning a Nokia 770 tablet into a Star Trek style ‘Sensor Net Tricorder’ – he shows a clip from Star Trek of them tracking aliens by pointing the device and tracking their biological activity as an example. And so MIT has turned the 770 tablet into a device that lets you track power use and lighting around the building, via its plug sensors.

“This goes much more beyond 3D virtual worlds. It’s the beginning of something I like to call scalable virtuality. The manifestation of virtual phenomena in the real world becomes a function of available and appropriate information portals.”

I am, frankly, floundering. It’s me, not him. At least, I think it is.

I’m not being flippant here, by the way. I’m genuinely interested in all this stuff, but I just don’t seem to be able to get my head around a lot of the applications as piloted at MIT – perhaps it’s the next stage when they’re commercialised that they start to appeal to unscientific geeks like me.

Actually, now Paradiso is showing a video of something else, where a bloke is wearing special shoes that make wibbly techno noises depending how he moves. Now THAT’S cool. Yes, I am a numbskull. The project is called Expressive Footwear, and there are serious uses too, besides jumping about making klang noises.

Other projects: one using sensors to measure lots of data from a pitcher’s arm, which can be used to track various stats about the acceleration of his hand, wrist and so on, and then be used to decide, say, when he’s getting tired, or if he’s too stressed. Presumably this is more useful than just following how he’s pitching.

This data could be used for any athlete, and could even be fed back live to, say, TV broadcasts. As in ‘wow, Andy Murray’s torque on that serve was 11.7 ohms, but his muscle definition degraded by 17 teraflops…’. I am being flippant now, yes. But seriously, this sort of thing could be the next level of stattiness for sports broadcasting, going beyond the pure ‘what the player’s done’ stuff they call up nowadays.

Ooh, more dancing. Using sensors on a dancefloor, so that the way people dance affects the music – if they get frenetic, the music changes, and so on. I wonder where that ends though – 300bps gabba techno, presumably. It’s a cool idea though. MIT WANTS TO KILL OFF DJS! Sorry, some more scaremongering there…

Finally, something called the UberBadge. A badge with sensors on it, and a scrolling LED display, which can be fed messages. You can exchange information with other people’s badges – so at a trade show, you’d ‘bookmark’ people you met, by flashing your badges at each other, and then log in to a website later to get people’s contact information.

They can even track fidgeting in an auditorium using built-in accelerometers – so if you’re shifting about more, the badge knows you’re bored. Conference organisers would love this stuff – they could wire it into a big gong that automatically bongs when a set percentage of the audience are fidgeting. That’s my idea, I should stress.

So, the killer app for this, would be feeding a message into people’s badges in the audience, flashing them up when a speaker is running out of time, and then scrolling a STOP! message across every single badge in the room (and, if they don’t, following up with a REALLY STOP!’ message. This is ace, and the video showing it is very funny.

I don’t feel quite as stupid at the end of Paradiso’s presentation as I did halfway through. There’s so much that’s capable with this idea of sensors in and around real world environments, feeding data back for a reason. I gravitate towards the silly or amusing ones, is the problem I think.

Oh, questions. Paradiso thinks the musical applications will be the earliest to be commercialised – building upon what’s already being done with the Nintendo Wii. Thinking about that dancefloor example, I guess if you had sensors tracking people’s dancing, you could use the data for the lightshow too.

Someone’s just asked “Who needs this?” Ha! he’s more stupid than me. Probably. Or he’s the cleverest person in the room, of course. But Paradiso says there are lots of applications, but it’s for other people to decide which of MIT’s innovations are useful, and which aren’t.

For the latest posts from the show, check our Nokia World 2007 category