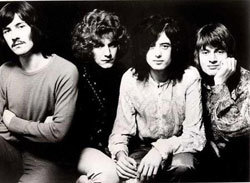 Fancy sharing the moment Led Zeppelin with those lucky ticket winners? Well, you’ll have to be quick as the band’s management is acting against YouTube to get any fan-recorded clips removed, according to Billboard magazine.

Why? Well, there is a copyright issue obviously – Warner Music does have an arrangement with YouTube for posting copyrighted clips, but this isn’t a request from their label, but apparently the band themselves – although tracking and removing the clips certainly isn’t going to be easy due to the poor quality of many clips.

The real reason is undoubtedly money. This reunion gig has shifted heavily from a goodwill gesture to a pocket-lining exercise, with an endless stream of reissues and cash-ins. And as someone who failed to get tickets, I was surprised to get ‘spammed’ a few days back with an email trying to sell me merchandise! The reason the band want these clips taken down is probably down to a DVD release of the concert next year – the final bit of blood out of this particular stone (except for the final tour obviously).