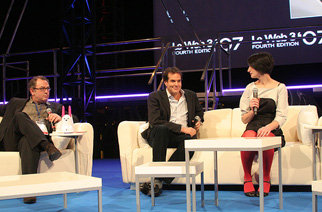 What happens when you get Mattias Leufkens, moderator of the World Economic Forum, Rafi Haladjian of Nabaztag, Iris Ben David, of Style Shake (a site that allows you to create your own clothes using an interactive design service online), and Brent Hoberman from Last Minute and mydeco sitting on a sofa together?

A vague sense of unease, that’s what. They’ve just spent the past 30 minutes talking about the impact of design on the web, and thanks to Rafi Haladjian’s decision to criticise Hoberman’s new venture, mydeco (which allows you to work out how you want to design your home using a virtual design service, discuss with others, and find the best places to buy products), the conversation become strangely stilted.

And when it was his turn? Well, no one actually sat there and said “this guy has built up one of the few Web 1.0 success stories and you’ve created a plastic bunny that sometimes connects to the web if you’re lucky”, but that was the general gist of the discussion.

And since it followed on directly from Philippe Starck’s talk about ‘no products’ which are just large lumps of pointless plastic that are designed to look nice but do basically nothing, Leufkens obviously felt obliged to ask Rafi if this wasn’t just a ‘no product’. Clearly in a belligerent mood, Rafi insisted that the Nabaztag does plenty of important stuff. He then proceeded to show a new book they’ve launched that includes an RFID tag so that the Nabaztag can read the story to your child. Which didn’t work. No surprises there (maybe I’m just bitter and cynical, but we have never been able to get any Nabaztag to work in Shiny Towers).

Then there was more awkwardness as both Iris and Brent said they were unlikely to ever use it. Brent said that he loves gadgets but that this doesn’t solve any problem for him, and therefore is not something he would feel the need to buy. I’m not sure if any of us learned anything useful from this panel discussion, but it was fun to watch one angry bunny owner getting all uppity with one awkward posh internet millionaire!

Check out our other posts from the show in the Le Web 3 category.