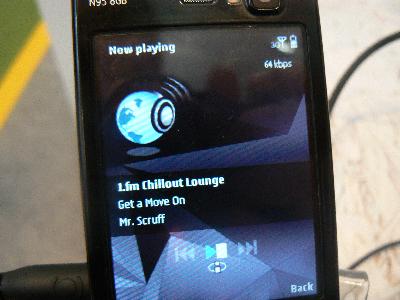 Earlier this week, Nokia announced its Nokia Internet Radio application, which lets you stream online radio stations to your handset, over 3G, Wi-Fi or even GPRS. Since it’s on show at the Nokia World exhibition for the first time, I took the chance to have a go, and put some questions to Saket Gupta, program manager in Nokia’s Nseries Hear New team.

Personal impressions first: the app is very slick to use, and it’s certainly easy to search for available streams, and quick to fire them up. They’re a strange mix though: some purely online stations, and some niche local stations, but not many big names in the UK at least. Where are the big guns?

“We only include broadcasters in our directory that have agreed to be included, by signing up on our website,” says Gupta. “It’s a simple process, but we can’t include them if they don’t sign up.”

The audio quality depends on the bitrate at which you’re streaming a station – 128kbps sounds good, while 64kbps sounds… less good. The quality of streams depends mainly on what quality they’re originally broadcast in, although the Internet Radio application can also choose to downgrade them to suit your connection.

“If one station is broadcasting in two or three different bitrates, the application is intelligent enough to serve you the right link depending on whether you’re connected by GPRS, 3G or Wi-Fi,” says Gupta.” But the user can also go in and change the settings for each if they like.”

You can find stations from within the application by searching or browsing, but you can also type in your own URLs, or go to a site like Shoutcast in the phone’s web browser and click on station links, which will automatically fire up the Internet Radio application. Oh, and you can also import WinAmp playlists of radio stations.

How about personalised online radio, like Last.fm or Pandora? “That’s something at which we can definitely look in the future, but it’s not in this version,” says Gupta.

Currently, the app can be downloaded from the official site (link below), while N95 and N91 can go to www.nokia.mobi on their phone and download it directly. Currently, the app is only available for the N91, N95 and N82, with more coming next year. It’ll only be Series 60 v3 onwards though, and new handsets will have it preloaded next year.

For the latest posts from the show, check our Nokia World 2007 category