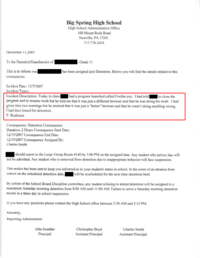 Man, the browser wars are getting out of hand. Now teachers are getting involved, handing out detentions for using the wrong application to surf the internetweb. At least, that’s what’s happening at the Big Spring High School in the US. Some poor kid was handed a detention for using Firefox in class. Here’s the teacher’s report:

“Today in class [DELETED] had a program launched called Foxfire.exe. I had told [DELETED] to close the program and to resume work but he told me that it was just a different browser and that he was doing his work. I had given him two warnings but he insisted that it was just a “better” browser and that he wasn’t doing anything wrong. I had then issued his detention.”

It’s got the smell of a fake to me, since it’s too funny to be true, but then teachers can be clueless. Anyway, in certain British public schools, you can still be whipped for using iTunes instead of Windows Media Player…