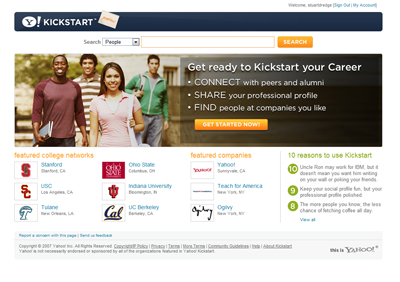 Does the roaring success of Facebook, MySpace and Bebo mean there’s no space for new social networks? Yahoo thinks not, and has a new site to prove it called Kickstart. It’s like a cross between LinkedIn and old-skool Facebook (when it was just for college students).

So, it’s about connecting students with alumni of their universities. In other words, out with the drunken party photos, and in with selling your professional qualities in the hope that someone will employ you. It sounds a bit Old Boys Club, but anyway.

The service is light on features right now, but you can tell Yahoo has put a decent amount of thought into the overall positioning of Kickstart, which does provide a genuine alternative to the Big Three social networks. Yahoo is clearly hoping that people will see the need for a separate ‘professional’ profile from their personal one on Facebook, Bebo or MySpace.