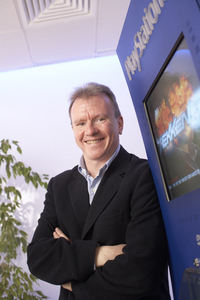 Okay, so the iPhone has been out for ages, Google isn’t making a gPhone after all judging by the announcement of its Android platform. What mythical handset are we going to gossip about now? Ah, the PlayStation Phone…

Yes, this rumour’s been around for a while, but Sony Computer Entertainment exec Jim Ryan (pictured) just reignited it by saying “The PlayStation is a proven success and so is Sony Ericsson. Convergence with the two arms working together is definitely plausible.”

It’s unclear whether he’s thinking of putting a mobile phone module into the next PSP, or a PlayStation chip into a Sony Ericsson mobile phone however. Whichever strategy Sony chooses, it would fit in with Sony Ericsson’s other branded phones: Walkman, Cyber-shot and Bravia. Indeed, PlayStation is the last big Sony consumer brand NOT to have been turned into a phone…