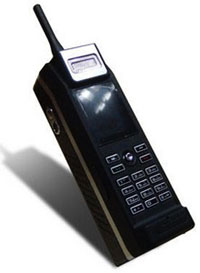 Like this thing – the Mini MOB. Packing your usual basic phone features into a businessman’s phone case from 1988, the Mini MOB also plays MP3s and has a camera, plus there’s a MiniSD slot on there for upping your file-carrying potential.

Technology this advanced would’ve seemed like witchcraft to even the most forward-thinking 1980s businessman.

Mini MOB’s significantly smaller than the original models it’s inspired by, though – at only 11cm high and 3.5cm wide, it’s about as chunky as a modern-day N95.

Supplied unlocked and ready for action on any major network, Mini MOB can be bought for a rather steep £160 from here.