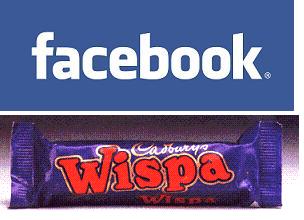 We’ve been hearing reports in the media the last few weeks that Wispas were making a comeback, after many years since the aerated chocolate bar was discontinued. It was only the other night I saw one in my local off-licence when I nipped over for a bottle of ketchup, and according to Shiny Shiny, we have Facebook to thank for this national treasure being made available once again, and for the extra fat on our thighs. High five!

Cadbury has commented that “This is the first time that the power of the Internet played such an intrinsic role in the return of a Cadbury brand,” with 93 groups on Facebook all begging the company to return their favourite chocolate bar. Never underestimate the power of the ‘book – I’m off now to create an internet campaign to get Sooty back on telly.