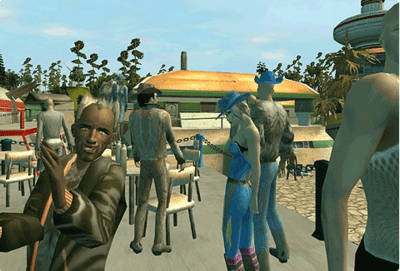 Right, time for a panel session at Virtual Worlds Forum Europe, on business models. In other words, where’s the dosh coming from? Moderator Corey Bridges of The Multiverse Network is kicking things off by saying virtual world companies can learn a lot from games like World of Warcraft and Lineage, because they’re making shedloads of money (I paraphrase, obviously).

Thomas Bidaux from NCSoft Europe is first up, and they make massively multiplayer online games (MMOGs), so he should know that area well (Lineage and Guild Wars are among their games). The company’s most common model is subscription, where people pay a monthly fee to play a game.

However, the company is trying some games where the money comes from micropayments – item sales etc – while Guild Wars is based purely on selling the original game to people.

Now Frank Campbell from MindArk, which is the company behind the Entropia Universe, (pictured above) which has around 650,000 users. It’s a “platform for online interactive entertainment, social networking and e-commerce”. So it’s part game, part content sharing service, and people can sell stuff to each other (and businesses can sell stuff in the world too).

The software is free to download, and there are no subscription fees, but MindArk makes its money from the real-cash economy within Entropia. So people make money within the world, and MindArk presumably takes a cut. However, its future is as a platform, says Frank – MindArk is licensing it out to other companies – one Chinese company called CRD has already done this, and plans to launch its own virtual worlds in China.

Coo, now Ginsu Yoon is up, he’s the SVP international for Linden Lab, which runs Second Life. He says its big differentiator is its user created content, letting people indulge their creativity. “Our business model is simple, but misunderstood,” he says. “We don’t have an advertising model. It’s based around our server infrastructure. When you buy virtual land, that’s just a term for the hosting on our server.”

However, Linden also makes money from monthly subscriptions and micropayments using its Linden Dollar currency. He’s also talking about all the Second Life users who are making money within the world, from creating content, or offering services – the companies making Second Life zones for brands or events, as well as companies using it for business and training purposes.

He also talks about virtual goods – “Why would anyone want to buy a virtual flower or car?” – It’s not just like a decal that you put on your computer, but instead “a virtual good is a tiny little service – the service of storing and rendering this object in connection with some kind of virtual world”. Eh? Well, a virtual flower is meaningless in itself, but if you’re giving it to someone, it has “meaning in connection with the virtual world that you’re in”.

No, sorry, still eh? But anyway, next up is Ben Richardson from Makena Technologies, which is behind There.com, which we wrote about yesterday, and it also makes MTV’s virtual worlds. There.com now has about a million members, average age 22, and more than half are female, spending more than 20 hours a month within the world.

“Virtual worlds are really about community,” he says. “These are organic entities, if there’s no one there when you go in, you have to come back.” He’s talking about how brands can interact with virtual worlds, following on from yesterday’s panel.

Now he’s talking about working with Capitol Music Group, which wanted to increase its “artist engagement with users”. It involved creating a virtual nightclub for the label. “We had interactive kiosks where you could purchase the artist’s content, download from iTune, but you could also meet the bands live,” he says.

“The bands came into the world in the middle of their tours. The point was to engage their fanbase in a way they had not been able to do before. It’s a once-in-a-lifetime experience for the fan, to have a conversation with the artist and interact with them.”

42,774 people clicked into the e-commerce kiosks and bought stuff, while 17,463 people visited the nightclub, and 4,363 people attended the live event. But the real benefit was the amount of time fans spent interacting with the bands. The big selling point for virtual worlds is that users spend more time engaging with a brand – 10 minutes in There.com, compared to 12.6 seconds interacting with, say, an online banner ad.

Now, Ben’s talking about how brands working in virtual worlds have to look beyond ‘reach’ (how many people you target) and towards ‘time spent’. Although I wonder if brands would rather have a little time with hundreds of thousands of users, than have 4,000 people attend a live event.

But that’s just the cynic in me – presumably if you’re a marketing bod at a record label, you’re now wondering whether to plough money into virtual worlds or, say, Facebook applications. It must be an interesting challenge for virtual world companies, anyway.

Now, to the panel bit. How much money are these companies making? Frank says Entropia users made $360 million of transactions last year, although he’s being a bit more vague about how much MindArk made from that. For Second Life, the similar number of in-world transactions is closer to $500 million says Ginsu, with Linden taking a “small cut” of that. “The more you try to capture of that, the less successful you end up being as a platform,” he says.

Ben says There.com has four streams of revenue – membership upgrades (e.g. voice chat), microtransactions, which is a huge stream of revenue for Makena, which takes a small eBay-style percentage. Third is advertising, and fourth is e-commerce – the ability to buy real-world goods virtually, and Makena taking a percentage. He didn’t say how much the company makes from any of those ;o)

Question for Frank: does the Entropia sci-fi storyline / theme get in the way of commercial stuff? “Not really”. Will they abandon the narrative? “No, I don’t think so. Our model also includes updating the universe every six to eight weeks with new content. Naturally along the way, we have included more social systems, like uploading your own digital content. But I don’t think it will change – it allows us a lot of opportunities.”

Good question: where will revenues come from in three years time? Ben: “It’s impossible to say! But if I had to throw a dart, it’s really going to come down to your identity in-world. People are investing heavily in their virtual identies. We’re seeing that in terms like acquiring merchandise for your avatar. Micro-transactions.”

Frank agrees, talking about the social side. Moderator Corey harks back to the time when people thought the internet would be subscription-based, which clearly wasn’t right – instead, it’s moved towards advertising models.

Thomas agrees that “subscription is going to phase out in the game industry. There’ll be more and more games monetised by micropayments and advertising.”

Now an interesting question: “What about us old geezers, who have money?” from a man with a beard. He wants to know why more virtual worlds aren’t targeted older, non-geeks.

Corey says it’s an early adopter phase at the moment. “I think most virtual worlds out there are not as usable as what we’re gonna see in the next few years. But that’s an issue: right now, early adopters, I think, tends to be a younger group of folks. As the usability gets better, then you’ll see the demographic spread increase.”

Ben agrees that this is an important point. Although There.com’s average user is 22, there’s actually a “fairly equal distribution of demographics”, with the 50+ market being among the largest spenders AND the largest creators of content. “They keep the community alive, and they’re generating frankly significant amounts of revenue.”

Frank says Entropia also has a lot of older users, although it’d like more. Ginsu says Second Life is the same, with a median age of around 32. “Older users tend to use Second Life more than the younger users, and are more involved in the creation of content and businesses.”

He also admitted that Second Life and similar worlds are “difficult to use” compared to regular websites. “The peripherals have to catch up. We all wanna see the data gloves and hardware peripherals to interact with this environment! We’re not working on them, but we’re confident that they’re going to develop. Every time you see those peripherals developed, you’ll see them integrated into virtual worlds.”

Data gloves! It’s taken a day and a bit, but I’m glad old-skool virtual reality hardware is getting a mention. Now, about full-head visors…

Anyway, that’s it – an interesting panel, I think you’ll agree. And a lot of words typed by me.

Check out other stories from the Virtual Worlds Forum Europe in our Virtual Reality category.