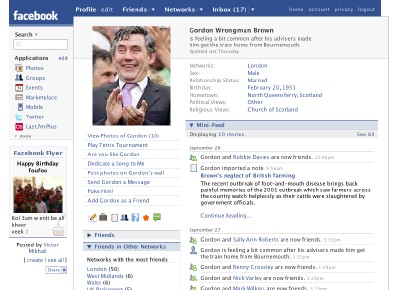 Assuming Gordon Brown has the stomach for a fight, we could have a general election next month here in the UK. Normally, this would be cause for advertising agencies to lick their lips at the prospect of lucrative billboard and TV ads for the various parties.

But we’re living in a Web 2.0 world now. Just look at the US for proof, where campaigning is well underway for next year’s presidential election. The various candidates have their own blogs, they’re using YouTube, they’re holding debates using MySpace… It’s a thoroughly modern way of campaigning.

So what about us Brits? Here’s ten ways Gordon Brown, David Cameron and the rest can add some Web 2.0 spice to their campaigns…

1. Battlebus blogs. We want the inside scoop on what it’s like travelling round the country shaking hands, kissing babies, and punching any egg-throwing protestors who get too close. Give every party leader a laptop with an HSDPA card, and get them to blog live. Or better still, get the real loose cannons in their parties to do it (Hi Boris!).

2. Flickr albums. MP James Purnell got exposed recently for a spot of Photoshop fraud, but he should embrace it with his own Flickr album showing the time he met Nelson Mandela, the time he scored the winning goal in the FA Cup final, and the time he snuck past Neil Armstrong to be the first man to walk on the moon.

3. Facebook applications. I can’t believe David Cameron hasn’t wised up to the idea of launching a Facebook app asking people to submit their policy ideas. “Doesn’t matter how silly, if there’s cheap votes to be gained, we’ll endorse ‘em!”

4. MySpace voting. Forget ballot boxes and postal votes. Every constituency should vote by adding themselves as friends to the MySpace profile of their chosen candidate. Note: there’s potential for abuse of this cutting-edge technology (i.e. someone capturing Worcester East on a 78% swing because they’ve added 70,000 emo-folk singer-songwriters from Illinois as their friends).

5. More poking. Don’t shake hands with voters: poke them. Tories have been doing this for years of course, if you swap ‘voters’ for ‘secretaries’.

6. YouTube videos instead of party political broadcasts. The ones with the best rating would get most plays on ‘proper’ TV. I would actually vote for the Liberal Democrats if Menzies Campbell mimes his speech in the style of the Chinese Backstreet Boys.

7. Second Life debates between the party leaders. Actually, this is a rubbish idea, but I bet it’s the most likely of all these suggestions to actually be taken up.

8. Sneaky hack attacks on rival parties’ web operations. If only to allow the Conservatives the chance to rehash a classic ad and launch billboards saying ‘LABOUR’S WIDGET ISN’T WORKING’.

9. Streaming Last.fm playlists for every candidate. Let’s hear what’s really on their iPods before giving them our vote. Automatic disqualification for anyone who pretends to like the Arctic Monkeys to secure the youth vote. It’s all about the Klaxons this year, grandad. So a neon-clad teenager told me, obviously.

10. BorisCam. Whatever your political persuasion, 24-hour live coverage of Boris Johnson going about his bally business could only help the Tories’ campaign. Or kill it stone dead.