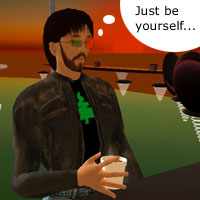 Now, chances are you spend a lot of time on the internet. There’s nothing wrong with that. In fact, it’s definitely better than spending your evenings worrying about the sex life of Ian Beale and which moron’s going to get voted off whatever abysmal reality show is currently fashionable.

But doing job interviews? Online? In the odd fantasy world of Second Life? It’s corporate suicide for whoever hires someone based on their “internet persona!”

Global consultancy firm Accenture has apparently been interviewing potential employees in Second Life, following a series of job fairs in the weirdo-collecting virtual game. But people aren’t really the same on the internet as they are in real life, are they? It is literally the worst idea anyone’s had for a good 20 years.

The New Scientist report goes on to list possibly useful applications for Second Life – keeping all the freaky IT staff holed up in online towns and safely away from the normal people.