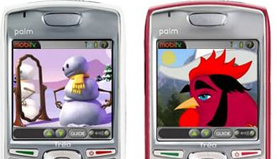 Palm must have hired some whizzy new PR guru, as their marketing assault over the past few weeks has been astronomical. Not only did they launch a suspenseful ad campaign for what was announced last week to be the 500v and give away five of the new smartphones, they’ve now teamed up with MobiTV for the Treo Mobile Comedy Film Festival.

It starts tomorrow, and will run until October the 18th, giving aspiring film-makers the chance to create a 60-second or less film on any subject. The winners will receive a free trip to LA to attend the awards show at the famous Grauman’s Chinese Theater (hosted by Susie Essman who plays Susie Greene in Curb Your Enthusiasm, no less), plus $1,200 worth of Treo goodies. With several different categories to trump, you really don’t have any excuse not to enter your film in by September the 24th. Good luck, aspiring Wes Andersons!

If you have better things to do with your time than create films however, your lazy ass will be pleased to hear that all Treo smartphone users will receive a one-month trial of MobiTV, the TV and internet radio provider for mobile handsets available on 3 and Orange in the UK.