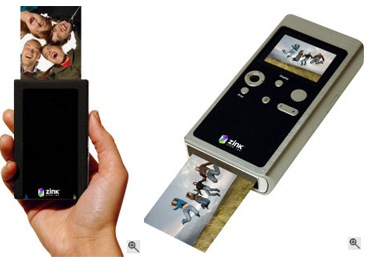 Zink, an American company we’ve been hearing a little about in recent months, has finally confirmed two of their first products they’ll be launching shortly, and I must say, I’m sceptical as to whether they’ll be successful or not. Previous companies such as Fujifilm and Olympus have tried converging cameras and printers together, and not made much of a splash in the market.

On the right is a combined digital camera and printer, as yet unnamed, but it’s been confirmed as featuring 7-megapixels, a 3x optical zoom, 2″ LCD screen built-in flash strobe, and images are stored on SD memory cards. 2″ by 3″ borderless paper from Zink can be used to print the photos out directly after shooting them.

On the left is a standalone printer which has the same 2″ x 3″ borderless print size, and runs off battery power with added wireless connectivity. No word on pricing for either of the products, or when they’ll be released, but it’ll be interesting to see how the public receives them when photo-printing is a dying market due to photo-sharing sites such as Flickr.