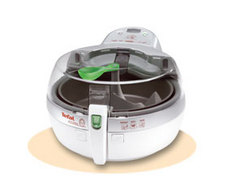 Tefal’s new ActiFry claims to fry four potatoes worth of chips in a mere tablespoon of oil, reducing the fat content by a whopping 97%. It’s all to do with the way the oil is circulated around the cooker, apparently.

Now look here, Tefal, this just won’t do. Us Brits might have lost our empire, but we’re not going to give up our supremely greasy heart-attack chips without a fight. Dammit. It’s healthy-eating gadgets like this that risk turning us into a nation of skinny types who don’t wheeze when walking to the nearest pub.

I feel like starting a protest campaign. Forget fat being a feminist issue: if British males lose our man-boobs, we’ll be nothing. Tefal, consider yourself told. And the same goes for you, Foreman…