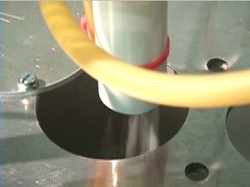 Okay, so it sounds silly. But bear with me, it’s making An Important Point. The device is called eRiceCooker, and it’s the work of Annina Rüst at MIT. It tracks online news about genetically modified rice, and whenever there’s a new report, a quarter-cup of rice is chucked into the cooker (it exists in the real world, I mean, it’s not a virtual online cooker).

Then, when there’s enough rice in the cooker for a meal, water is automatically added and it’s switched on, before sending an email out to a mailing list inviting people to eat it.

“The project is designed to create awareness to issues surrounding genetically modified organisms by producing excessive amounts of cooked rice and attempting to feed people with it,” says the official site. See, I told you it wasn’t silly. Now, about my ePotNoodle Boiler…

(via We Make Money Not Art)