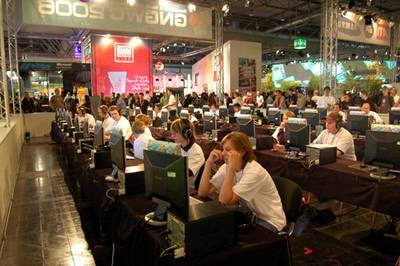 Sorry, this isn’t about thousands of World of Warcraft players emerging from darkened internet cafes to try their hands at javelin and the steeplechase. Although I’d pay to watch that. Instead, it’s a competition called Game&Game World Championship (GNGWC for short) which aims to find the most ninja MMOer in the world.

It’s the brainchild of the Korea IT Industry Promotion Agency (KIPA) to promote Korean online games, so WoW doesn’t feature. Instead, players have to prove their mettle in six games: Shot Online, Bomb’n’Dash, Silkroad Online, Record of Lunia War, Navy Field and Warrock. No, I’ve not heard of them either. That’s the point of the competition, innit.

The European preliminary round kicks off this month, with America and Asian competitions following in September and October. The best players will then take part in a grand final on 1st December in Seoul, with the ultimate winner trousering $5,000.

I’m not entirely clear on the details, mind. Do players have to be good at ALL six games? It’s like the decathlon of the MMO world! Well, sextathlon. Also, given that all six games are Korean, I’m not expecting the European champs to do that well in the final – it could be messy.