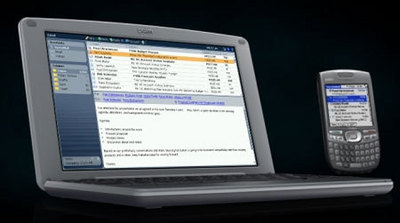 This is just bonkers. Deutsche Bank analyst Jonathan Goldberg has issued a research note claiming that Palm’s Foleo device has been delayed due to software bugs that “apparently included an inability to syncronize the Foleo with most models of the Treo, in particular the nominally high-volume Treo 680”.

Hang on a minute. Would that be the Foleo that Palm tagged “the smartphone’s best friend” when it was unveiled in May? The one that’s USP is synchronizing with Treo smartphones? That’s one embarrassing bug if so, in a device that’s already received a mixed reception from the industry (and ‘mixed’ is putting it kindly).

Goldberg suggests the Foleo will now go on sale in late September or early October, but as inauspicious launches go, it’s right up there with Nokia’s original N-Gage and