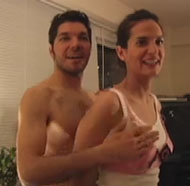 We’ve written about the bra and pants video game controller before, but since it was on show at this week’s Siggraph 2007 game developer geekfest, any excuse…

It’s a concept piece made by JennyLC. There are lots of photos of Jenny’s bra over on her Flickr account. And if you like that, you might also enjoy the Solar Bikini, which is also on show at Siggraph.

We really must attend this so-called “video game developer conference” next year. They seem to be having a whale of a time looking at all these girls in bras.