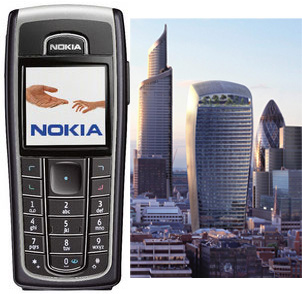 The skyscraper which has been threatening to be plonked upon our modern East-End London scenery amidst the suits and Vice Magazine douchebags has just been approved by the City of London, and it’s already been given an ‘affectionate’ nickname – ‘the Walkie Talkie’, by the skyscraper-equivalent of a Trainspotter, SkyscraperNews.com.

Already kicking up a fuss, with the English Heritage claiming it’s got an ‘attention seeking form’, it will use 21 million kilowatt hours of electricity per year, which is actually 10% less engery than an average building of similar size, surprisingly.

Less walkie-talkie, and more Nokia 6230, methinks. Or any generic top-heavy mobile phone, really. We need to create an initiative, to give this building a goofy name like the NOKIA 6230 TOWER, become the next people who create moronic nicknames for skyscrapers. Whoever named The Gherkin, we’re encroaching on your monstrosity-dubbing territory. Watch it, kids!