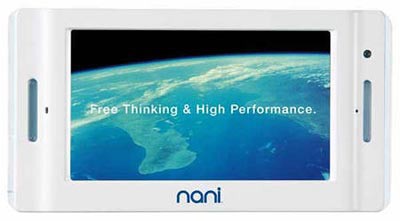 You might think Nani is Manchester United’s new wing-hugging Portugese starlet. Mainly because, well, he is. But Nani is also the name of Sophia Mobile’s new handset, which is coming out in Japan, and is the latest wannabe iPhone-busting mobile.

It’s got a 4.3-inch touchscreen, plays video at 800×400 resolution, and has Wi-Fi, a camera and a built-in TV tuner. Oh, and it also boasts slinky white styling, borrowing more from old-skool iPods than from the iPhone.

It’s unlikely to be released here in the West of course, and it’s still unclear just how popular iPhone will be in Japan (perhaps we should be talking about iPhone as a potential Nani-killer, not the other way around). But that’s not enough to make me pass up the chance for a ‘Will Nani get Steve Jobs’ goat?’ line. Sorry.