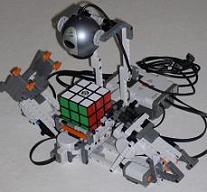 The mammoth task that took us six months during the spring and summer of 1983 is now fully automated in his LEGO Mindstorms creation, which includes webcam sensors to pick out colours, motors to rotate the cube and a clever robot brain to fix the puzzle.

Obviously no one told poor Daniele that simply wedging a screwdriver beneath one of the sqaures, taking the Cube apart and putting it back together again is by far the quickest method of solving the Cube. As we found out in the Autumn of 1983.