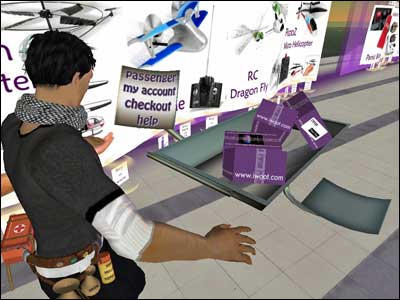 The store is housed on the IWOOT island and the firm say it’s the first within the virtual world that lets you buy over the counter with Second Life’s currency Linden Dollars rather than be pushed to an outside website to make the purchase.

As well as buying real products to be posted to customers at home, the shop will also sell virtual versions of popular IWOOT gizmos to be used in the online community. It was launched in 2003 by Linden Lab and has more than seven million registered users living an alternative existence there each day.

Read on below for more information on the shop, and to view a video interview Shiny Shiny’s Susi did yesterday with the IWOOT owner.

IWOOT founder Tim Booth said: “The idea was to create the first 3D shop in Second Life where you didn’t have to leave there and go back to the 2D net to carry out your transaction. We’ve picked gadgets that sell for under £50 because the Linden dollar exchange rate is pretty steep. We’ll rotate the products too and keep creating new virtual ones.”

The store is housed on the IWOOT island which also has a lighthouse, beach and maze. The space has five buildings which from the air spell out the company name. The letter ‘i’ contains a marketplace where gadget builders throughout Second Life can showcase and sell their work.

Tim added: “There are two sorts of virtual products. They are versions of ones we sell in real-life like the Binary Clock and Armageddon USB hub.

“But in another part of the island, Second Life inventors who have dreamt up virtual products like remote-control cars, magic carpets and rollerskates can sell their stuff on to others. This is community content and we don’t take a cut. 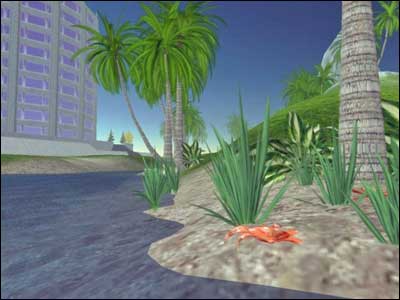 “We welcome anyone to come in and sell their products there. It is content enrichment rather than for any commercial gain. We’re like a shop window for them.”

The island also houses an open air cinema and in the 3D maze will be a treasure hunt with a top prize of 100,000 Linden Dollars.

Tim said: “I think it will be pretty popular because it is a first and any first in Second Life always is. We’re hoping they’ll be a buzz around the island as people come in and have fun. It’s inevitable the internet will go from 2D to 3D and Second Life is the best opportunity right now to explore this. The only limit is our imagination.”