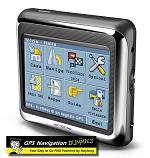 Wiley Publishing, maker of the ‘For Dummies’ series of tech-explaining books, is working on GPS Navigation For Dummies – an easy satnav system everyone should be able to use.

Although if you struggle with the concept of pointing at where you want to go on a map, you’ll probably find this just as confusing as all other GPS devices.

A 3.5″ touchscreen is there to make it easy for Dummies to prod a stupid finger at, while two million ‘places of interest’ stop them having to think about where to go and what to see themselves.

There’s also an included 2.0GB memory card and MP3 player, so Dummies can listen to whatever music Dummies like to listen to (Ministry of Sound compilations?).

So far the GPS Navigation for Dummies system has only been announced for America. We will resist inserting any sort of punchline here.