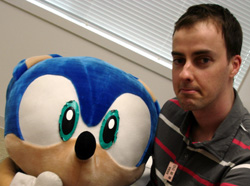 Following on with our self-indulgence here at Tech Digest, it’s time for you to meet our newest recruit, Gary Cutlack. Hopefully all of you are familiar with the blogs UK Resistance and Idiot Toys (we steal his content every other week, so you should ruddy well be by now), well Gary is the man behind it all. Yep, we’ve hired Commander Zorg, as he’s been known the last 10 years or so since he first started up his angry, opinionated anti-blog, and you’ve been unknowingly reading his articles the past two days.

Shiny Job: Something about games that hasn’t really been decided yet (Ed. – in other words, he’ll continue editing UK Resistance and Idiot Toys, plus contribute to Tech Digest and several of our other blogs once we, err, figure out what to do with him. Other than mopping the floors of Shiny Towers, natch).

Location: South London, although it’ll soon be somewhere else. Not saying where as there are a few Council Tax bailiffs that need shaking off.

Five favourite Web 2.0 sites (besides Shiny ones): I don’t really read sites, I just sort of lifelessly monitor news aggregators until it’s bed time. If I had to pick one, it’d be AVING Korea for its pioneering use of trade show photography.

Best 3 gigs you’ve ever been to: I saw the Yeah Yeah Yeahs once, that’s about it. Live music doesn’t sound as good as CDs. Plus going out’s for wimps.

Favourite 3 books: War of the Worlds, The Oxford English Concise Dictionary (for Scrabble evenings) and something cool like American Psycho.

Favourite 3 albums: Jeff Wayne’s War of the Worlds, Pulp’s Different Class and the entire Pet Shop Boys back catalogue (ripped to MP3 and stuck on one CD so it counts as one).

In the film of your life you’d be played by: Steve Buscemi doing a slightly Cornish accent.

What song would you pick for the soundtrack to your life: Pick any monotonous German techno track.

What colour toothbrush do you have: It’s brown. Not sure what colour it was originally.

What song would you want played at your funeral: I’d rather everyone just sat there in uncomfortable silence.

Tell us one secret about you that people wouldn’t expect: All I really want to do is live on an isolated farm and grow vegetables. I will have a really big dog as my friend.

If you were a car, what would you be: Something old and unremarkable, like a Volvo 345.

What was your first alcohol experience like (stolen from Pop Bitch): I drank a pint of shandy at the school leaving party and felt like a GOD.

If you were a videogame character who would you be: Dr Robotnik. Always with the big ideas, but never quite pulling any off.

Best technology purchase ever made: Probably the Evesham Micros 486SX33 PC I got in 1994, else I’d still be working for the Inland Revenue.

Last technology purchase made: Every day I consider buying an external hard drive but never do. Maybe this week Ebuyer will have the deal that could tip the scales.

Three tech items you cannot live without: A cooker’s handy to have so you don’t have to eat beans cold. I also like the radio. Owning gadgets has become a worry – will I get mugged? Where’s the charger? Is that even the right charger? His is better than mine. And so on. This is why I want to live on a farm with a dog that hasn’t got a better camera than me.

Apple or Microsoft: Microsoft, but only because liking Microsoft isn’t also “making a statement”.

Blu-ray or HD DVD: Both of them melted to death.

Plasma or LCD: LCD, although if I’d waited like everyone said I’d have an extra £300 in my account.