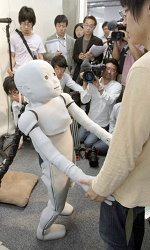 Scared of all those kids who hang around your town centre looking surly? Imagine how much more frightened you’d be if they were robots. Although I guess they’d be swigging WD40 rather than White Lightning.

Anyway, CB2 doesn’t drink OR hang around on street corners. But he is a child-sized robot who’s been developed by the Japan Science and Technology Agency. He’s 1.3 metres high and weighs 33kg, and has 200 tactile sensors embedded in his gray silicon skin.

He’s apparently got the physical ability of a 1-2 year-old toddler (hopefully without the tantrums), and can form words using his artificial vocal cord. He looks cute enough too, albeit a bit colourless.