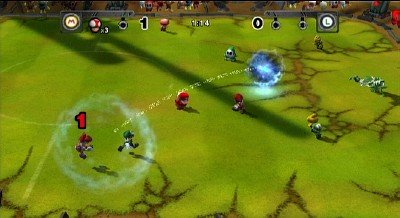 Today’s a momentous day for owners of Nintendo’s Wii console – it’s finally getting its first online game. Mario Strikers Charged Football is the game, and as you’d guess, it mixes traditional footy with all manner of Mario Kart-esque power-ups.

Players can go online via Nintendo’s Wi-Fi Connection service and battle it out head-to-head, earning points to send them soaring up (or plummeting down) the online rankings system. I’ve spent the morning testing it out for WiiWii, and here’s the Day One verdict: it’s genius. Read on to find out why.

First off, the game. It’s not exactly a serious soccer simulation in the Pro Evolution Soccer or FIFA mould, but even po-faced fans of those games should quickly lose their reservations and fall in love with Mario’s loony take on the beautiful game.

It uses the Wii’s Wiimote and nunchuk controllers to play, and despite fears that the result would be confusing compared to playing footy games using traditional joypads, Mario Strikers Charged Football pulls it off.

Strategy consists of basically passing the ball as fast as you can before you get flattened by a sliding tackle or giant mushroom, while Nintendo’s stable of Mario Kart characters are all present, with their own stats and special moves.

Most fun are the megashots, triggered by holding down the shoot button with your captain in the opponent’s half – the result is a barrage of balls exploding towards your opponent’s goal, with you scoring once for each that goes in. If only Peter Crouch could do this sort of thing.

Anyway, it’s great fun played alone, but the Wi-Fi Connection multiplayer mode is a triumph. You can play friendly matches against your registered friends, or Ranked matches to score points in the online rankings. In the latter’s case, you’ll be automatically matched up with an opponent – and judging by this morning’s play, it takes less than 10 seconds to do it. Marvellous.

In-game, there is no noticeable lag, so it feels just like playing the solo mode. Well, apart from the tactics, as they seem noticeably different – less time to trigger megashots for example, and opponents who ping the ball around the pitch at speed much faster than the computer-controlled opponents in the solo mode.

The greatest praise for Mario Strikers Charged Football online? It just works, beautifully and simply. And while I could quibble about missing features – no option to strap on a headset and shout at opponents for example – as a first showing of what the Wii is capable of over the network, it’s superb. Assuming you own a Wii and don’t despise football, this is an essential purchase. See you online.