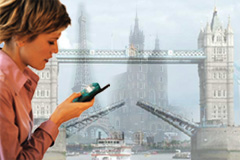 Today sees the European Parliament voting on how much mobile roaming prices should be cut, following accusations that the mobile operators have been overcharging us for years – something that won’t be news to anyone who’s had to flog grandparents on eBay to pay a post-holiday phone bill.

However, cynics are already pointing out that the operators will find other ways to claw back their lost roaming revenues. How? Here’s ten possibilities.

2. When you use the ‘Where’s my nearest cashpoint?’ location-based service, one of Vodafone’s hired thugs will be waiting when you get there to extort a £50 thankyou fee.

3. Creation of a separate Mobile TV Licence, complete with detector vans whizzing about to track down mobile users illicitly watching silly YouTube videos on their N95.

4. Drum up a spurious consumer-panic around mobile viruses, so the operators can flog us anti-virus software for our phones. On an annual licence, naturally.

5. Text-messaging prices adjusted to a sliding scale for longer conversations. Say you’re watching the Champions League Final and furiously texting mates – by the end of the match, you’ll be paying £6 a message.

6. Charge teenagers an extra 10% for phones with external speakers. It might not stop them playing music on the bus at ear-splitting volume, but at least the little eejits will be paying for it.

7. Sneakily raise domestic call charges. Sure, it’ll be cheaper to call home while gallivanting around Paris. But back in the UK, calling your nan in Weston-Super-Mare will now cost £4 a minute.

8. Charge £50 more for the iPhone. There’s plenty of swivel-eyed Apple fanatics out there who won’t mind.

9. Forget all that consumer-friendly stuff about STOP messages to avoid rogue subscriptions. Just put the Crazy Frog in charge of ‘Recurring Revenue Services’ and let him do his worst.