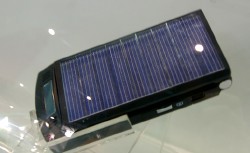 It’s an idea so brilliantly simple, you wonder why Nokia didn’t do it five years ago. Annoyed at the way your mobile phone battery always seems to go flat just before an important call? Then stick a few solar cells on the back so it can charge itself up via the sun’s gleamy goodness. Job done.

Chinese firm Beijing Hengjiweiye has just shown off its solar-powered phone prototype, at the China Beijing International Expo 2007. Okay, so it’s not the prettiest device in the world, but it’s a start. And they’re not the only company working on solar phones either.

Motorola recently patented a mobile LCD display that can allow sunlight to pass through to a solar cell, for example, which solves the fugly design issues. 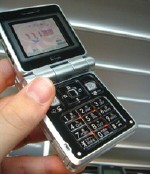 Meanwhile, in Japan NTT DoCoMo has unveiled a GBA-style mobile with solar cells on its outside (pictured), while Chinese firm HTW Electronics has produced its own effort too.

So what’s stopping this from being in every phone, consigning our chargers to gather dust at the back of our cupboards (and allowing those of us with snapped Nokia Nseries chargers to stop cursing Nokia’s flimsy-ass design)? Cost is presumably the main barrier to solar cells being in more phones, while design is another – they suit clamshells more than other form factors.

Still, anyone with some awareness of the annoyances of flat mobile batteries (i.e. everyone who’s tried to phone friends on the last day of a music festival) would probably pay a little extra for a solar phone. It’d be a more useful feature than mobile TV, anyway.