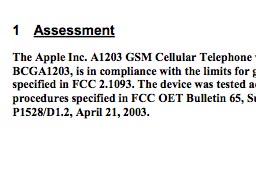 Apple’s iPhone is one step closer to release having received FCC approval.

FCC approval is required to sell the device in the States, and it passed with flying colours.

The FCC documents, obtained by AppleInsider, are for a “GSM Cellular Telephone with Bluetooth and Wifi” with the model number A1203 and FCC ID: BCGA1203.

The test report conducted on the 6 February 2007 states:

“The Apple Inc. A1203 GSM Cellular Telephone with Bluetooth and Wifi, FCC ID: BCGA1203, is in compliance with the limits for general population uncontrolled exposure specified in FCC 2.1093. The device was tested according to the measurement standards and procedures specified in FCC OET Bulletin 65, Supplement C (Edition 01-01) and IEEE p1528/D1.2, April 21, 2003.”

The iPhone is due to go on sale next month.