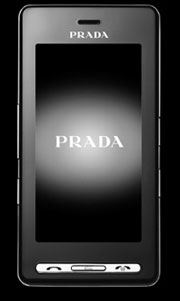 In certain quarters, it’s the most hyped phone since the last hyped phone. And is likely to be, til the next hyped phone. So, having managed to check it out briefly at 3GSM, leaving Kat to manage in Milan, I was thrilled to have it in my hands for a full 24 hours in my care, to get a real idea of what it was like.

I found it an interesting experience. Disappointing in the same way that Christmas Day is never as good as you think it’s going to be on Christmas Eve, but interesting nonetheless.

My initial reaction on getting it out of the box was the predictable ‘ooh, it’s so pretty, it’s so shiny, it’s so Versace. I mean Galliano. I mean Prada. Oh god, I wasn’t born for all these gadget collaborations’. And they certainly have packaged it nicely, in a beautiful black box, which just cries out for an unveiling in the way few other phones do (although LG do seem to have the monopoly on those currently).

When you turn it on, it defaults to the black and white screen that Prada were so keen on, although there are several other coloured wallpapers available. It also defaults to the clock which floats around the screen, unless it’s being dragged in another direction by your finger (it’s a touchscreen, remember?). The bulk of the screen is used to display the clock and wallpaper, with the option for messaging, calling and settings laid out across the bottom.

There’s also another option for your wallpaper, which involves a fish following your finger, although that wasn’t working on the preproduction model I had.

The messaging was what I was most interested to try out, since no one I know has been overly keen on the thought of entirely doing away with a keypad when it came to SMSing. The results were mixed. Whilst concentrating, I found the touchscreen just as easy as a normal keypad – it’s laid out in exactly the same way, with 2 representing abc, 0 being a space, in accordance with your normal T9 language. However, after a period of time, I forgot to be so exact, and found that I was frequently misspelling things. I don’t need to tell you how annoying it is to have to go and retype texts two or three times over…

Apart from the texting, the touchscreen worked better than I thought it would. I didn’t feel any particular lag, between hitting the buttons and the phone reacting, although there were several times where I had to tap something several times in order to get a response.

The menu icons were spaced far enough apart so that you didn’t accidentally end up with your MP3s when you tried to turn on Bluetooth. Plus, several of the functions have external buttons on the handset itself, such as the MP3 player, camera and the screen lock.

The camera itself is an adequate two megapixels, and has a light. The size of the screen meant that the photos looked clear and bright, as well.

The build quality overall was impressive, as it’s not only small and lightweight, but is only a few millimetres thick. One niggle I did have was how dirty the back of the phone got, which suffered the same fate as pretty much every ‘Piano black’ finished product ever – fingerprints everywhere. The button you pressed in at the bottom of the phone to release the back cover was also easily chipped, revealing that it wasn’t metal, but a cheap spray job on a cheaper material.

And as for the inevitable iPhone comparison? Forget it. Yes. it’s got a touchscreen, but that’s where the similarity ends. This is a phone. And it’s really nothing more than a phone. It’s not aimed at people who want constant access to their emails, to be able to access their Outlook calendar, or to download at high speed (there is a simple browser included, and yes, I know the iPhone isn’t going to have 3G). It’s for those that are all about appearances. And there’s nothing wrong with that.

It’s slated to appear in select shops (including Prada… and Carphone Warehouse) from the end of March. SIM free it’s expected to retail for 600 Euros (about £400), and pricing on contracts has yet to be released. They have said that it will be exclusively for 18 month contracts though.