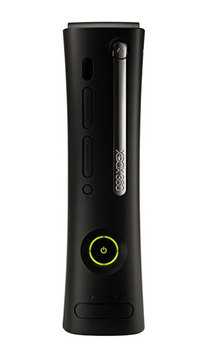 The long rumoured Xbox 360 Elite has now reached official status as Microsoft announced details and specifications of the new model. Much that was already speculated has proved correct: the new model will have a 120GB hard drive, a high-definition multimedia interface (HDMI) port and HDMI cable. The Xbox 360 Elite should also be selling for $479.99 – that’s about £245 on a direct exchange rate, but according to my quick calculations that should mean a realistic UK price tag of £325.

One thing it still lacks is the HD DVD player, currently selling for $199 in the US, so with a little more maths it turns out that Microsoft’s ultimate high-definition entertainment experience is actually a bit more expensive than Sony’s. Admittedly, there’s 60GB of storage space difference between the two, but it is an interesting change of roles.

Black is now the new beige and Microsoft has unveiled a range of black accessories to match the console. These cover everything from the hard disc drive to wireless controllers, charge cables and headset. The only noticeable exceptions are the HD DVD player and Xbox Live Camera – no great loss there though.

Microsoft did not mention anything about the rumoured enhancement to the unit’s chipset. It was widely believed that these are being streamlined to 65 nanometers which would have given the console a healthy boost in performance, but now it looks unlikely that new version will offer any significantly different internal hardware.

The Xbox 360 Elite will be hitting US shelves on April 29th – there’s no official date for a UK release yet.