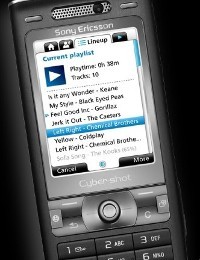 That’s certainly how Omnifone, the company behind the new mobile music service, has been spinning it in a series of pre-briefings to journalists this week.

MusicStation is a music subscription service for mobile phones, where you pay £1.99 a week for unlimited downloads of songs to your handset over the air via 3G or 2.5G, although there is a £2.99 a week option which also includes downloads to your PC or Mac.

Omnifone announced the service today, but it’ll be offered by mobile operators, with 23 having signed up already, including at least one in the UK, thought to be Orange or Vodafone.

There’s a certain amount of hype around the announcement – Omnifone says it’s the first time 2.5G subscribers have been able to download full songs over the air, despite O2 having done this in the UK several years ago.

However, Omnifone was bullish when it talked me through the new service, pitching it as a direct rival to Apple’s iPhone’n’iTunes combination.

“Apple’s iPhone announcement has shaken up the mobile industry,” says co-founder Rob Lewis. “It’s created a lot of concern among the operators and handset manufacturers in Europe. Apple is looking to take a significant amount of market share from the manufacturers, while the operators see it as taking them out of the loop in terms of full music track sales.”

Hence MusicStation, which Lewis says will offer an iTunes-like experience on 75% of phones available right now, rather than just one. It’s an application that’ll come preloaded on phones sold by participating operators, although on certain phones you’ll also be able to download it to your handset.

But hang on a minute. Most operators are already selling full music tracks on their portals. Lewis says that MusicStation is designed to be complementary to this, rather than compete. However, he’s not exactly brimming with praise for what the operators are doing already.

“Most mobile operators are aware that their WAP service doesn’t look like a Rolls Royce product compared to the iPhone,” he says. “Our service is complementary to that.”

But perhaps the most exciting element of MusicStation is the community aspects, which include charts of the tunes that are being played the most by users, the ability to create playlists which other MusicStation users can view, and send messages back and forth recommending tracks, albums and playlists.

There are also other connected features. “We’re constantly holding on the server details of your favourite music, playlists, friends and your personalised tastes,” says Lewis. “If you break your phone, or have it stolen, you can go into your Vodafone shop, get your new MusicStation handset, and when you connect to the network, all your favourite tracks and playlist data will be back.”

MusicStation will also include a personalised news service, where you can receive messages from artists that you’ve opted into (say U2, or Kylie Minogue) giving info on gig dates, ticket sales and new releases. On paper, MusicStation sounds ace – the application itself will hopefully be on show at 3GSM this week so we can get an idea of whether it lives up to it in practice.

But one thing is niggling me. Is iPhone really such a big threat to the mobile manufacturers and operators? After all, it’s expensive enough that it’ll be a niche, even if Apple does sell 10 million of the devices. So why should the mobile operators rush to adopt MusicStation over their own services?

“Apple is looking to take as much market share from the manufacturers as possible without doing anything to support the existing supply chain,” says Lewis. “The mobile industry, be it manufacturers or the operators, is desperately keen to make sure consumers have an alternative choice that’s differentiated.”

It sounds great. Let’s hope it’s not too long before us Brits get to try MusicStation out, to see if it really is an iTunes-beater.