Though Bink.nu reckons it’s only supposed to work on Internet Explorer and not Firefox (presumably on a PC), I’ve been able to watch videos using Camino on a Mac (shock!) Whether every piece of functionality is available is another matter – I was briefly stunned after watching a bizarre user-generated Soapbox-love video and didn’t dare delve any further. 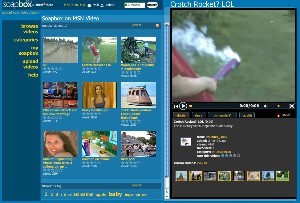 Despite the MSN branding (when I thought everything was going Live), the site looks pretty good. Different to YouTube, it’s possible to watch and browse videos from the same screen.

Will Microsoft make a success of it? Only the users will decide. Potential? Yes. Originality? Hardly.