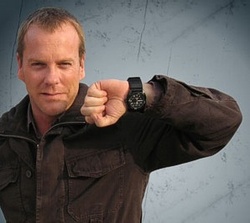 Jack’s watch is pretty important to him. After all, how else would he know when it’s nearly the end of an episode, and thus time to expect a shocking plot twist?

If you’ve been ogling the watch worn by Jack in Series 6 of 24, here’s some exciting news. You can buy it! It’s called an MTM Blackhawk Special Ops Watch, and it’s being sold online here in the UK for the princely sum of £329.95.

The watch also comes with a recharging pod to keep its batteries topped up, ensuring there’s no danger of “risking the watch integrity” (I think this means suddenly discovering you can’t tell the time while sitting on your commuter train home dreaming of being a secret agent).

Meanwhile, any watch that comes with a ‘heavy duty ballistic strap’ gets my vote. I don’t know what it means, but it sounds cool. The watch is only being sold on one UK website, Special Ops Watches, which also flogs a range of other spyboy timepieces. Get one. Dammit Chloe, get one fast.