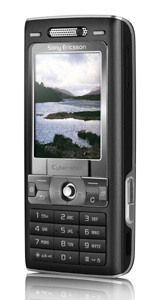 I’ve just been working my way through the Tech Digest mobile phone archives and realised that the Sony Ericsson Cyber-shot K800 camera phone was unveiled on 28th February 2006. And with mobile handsets coming and going so fast, it’s surprising to see the K800 voted Best 3GSM Handset at the GSM Association’s Global Mobile Awards 2007.

Launched last year, the K800 was the first Sony Ericsson Cyber-shot camera phone, featuring a 3.2 megapixel camera on a 3G mobile handset. See our preview of the handset for the full specifications. Since launch, it’s shifted 4.5 million units, as well as being used by James Bond in the Casino Royale movie.

Anders Runevad, Corporate Executive Vice President and Head of Sales, Sony Ericsson said: “Our Cyber-shot portfolio has made true mobile imaging a reality for millions of people and we are very proud that the industry has endorsed our achievements with such a prestigious accolade.”