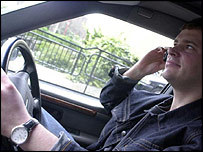 It’s been an offence for around three years to use a hand-held mobile phone whilst driving in the UK, but the threat of a fine doesn’t seem to have put people off. However, the threat of three points on your driving licence might make a difference.

New penalties for using a mobile in the car will come into force from February 27th. As well as the points, fines will be doubled to £60. According to Transport Secretary Douglas Alexander: “It’s quite simple – it’s impossible to do two things at once and do them well.”

New laws against using mobile phones in cars came into force in 2003. Research shows that 92 per cent of people support the law – but 21 per cent of those surveyed have admitted to breaking it. Home Office figures for 2004 show that nearly 74,000 fixed-penalty notices were issued in England and Wales for illegal use of a mobile phone while driving. However, a Liberal Democrat study last year suggested this meant only 1.1 per cent of those who admitted to the offence were being caught.