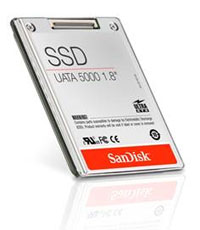 Previously, large capacity flash-based drives had been used primarily by the military, aerospace and telecom industries, which required reliability under difficult environmental conditions. However, NAND flash memory has made SSD a viable and economically attractive alternative to existing technologies in a wider variety of applications, including mobile PCs aimed at enterprise and consumer users.

According to Eli Harari, SanDisk CEO: “Once we begin shipping the 32GB SSD for notebook PCs, we expect to see its increasing adoption in the coming years as we continue to reduce the cost of flash memory. When these SSD devices become more affordable, we expect that their superior features over rotating disk drives will create a new consumer category for our retail sales channels worldwide.”

The drives are initially being pitched at “enterprise users”, with Sandisk hoping mass-market adoption will follow. Probably not for some time though, with the price of the SanDisk 32GB SSD around $600 when it goes on sale in the first half of 2007. But when prices do drop further, the company hopes that the increased reliability and performance coupled with a lower power consumption rate will give it the edge over more conventional hard disk drives.