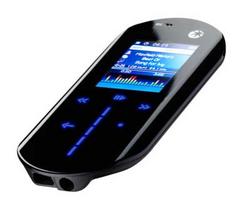 The dust has barely settled since the arrival of the MAX-SIN TOUCH, but Maxfield has already revealed yet another addition to its rapily growing MP3 player line up – the MAX-IVY. Blue is the new red this time and the MAX-IVY boasts a set of sexy backlit, touch-sensitive controls very similar to those found on its predecessor. This time though there’s a touch sensitive slider bar navigation and volume controls.

Like so many other flash MP3 players, it is roughly comparable to the iPod nano in size although it is a few millimetres larger in each dimension. That does however mean that you get space to fit a larger screen in (1.8”). It is compatible with a healthy array of audio formats including MP3, WMA, WMA DRM 10 and OGG Vorbis as well as JPEG image files. Interestingly it is even compatble with .lrc files, which will display the lyrics as you listen, however music in this format isn’t exactly abundant just yet.

Clearly aimed at luring in nano owners who have watched in horror as their pride and joy dissolves beneath a layer of unsightly scratches, the MAX-IVY has hard wearing magnesium casing that claims to resist scrapes “like water off a duck’s back”. Unfortunately there weren’t any ducks around to test this claim fully but I can say that it did survive being carried around in my pocket, accompanied by keys and loose change, and emerged in perfect nick. One thing that it didn’t resist however, was my grubby fingers, which rapidly clouded the screen in sweaty prints – oh well.

One of the MAX-SIN’s flaws was the lack of a coherent menu system and Maxfield has done a fairly decent job of addressing the issue here. Now you get a much needed, coherently laid out system with icons for all the various functions and a well laid out set of options including equaliser and playlist editor amongst other things.

In the box you get a good range of accessories too (although quite on the same scale as in Maxfield earlier music/photo/video player, theMaxMovie) including a lanyard, a rubberised case with a belt clip, headphones, a USB cable and charger, and various software tools to help you transfer music and video to the device. You can also just drag and drop files if you prefer.

Sound quality from the player was good, although it did sound a bit tinny in the packaged earphones, however these did have the advantage of being a fair bit more comfortable than some you get with other players.

Although the glowing blue controls look pretty stylish, they do suffer from a lack of precision. Navigation control was a bit of a hit and miss affair, with the slider bar coming up as a definite miss. Fortunately you can just use the skip functions to work your way through most of the menus but if you want to turn the volume down in a hurry you may well get caught out.

The player also makes a ticking noise in line with your button presses – obviously meant to emulate Apple’s clickwheel – but unfortunately it sounds a more like a spark from a loose connection than a click and this was further catalysed by the slider bar’s tendency flicker erratically when in use. It even prompted someone to ask me if the player was about to explode…

The most worrying issue, however, was that the player just didn’t like the USB ports on my machine. When connected, it kept going to the USB connected screen, then shutting down, then starting up again and so on, leading me to think it was a dud unit. However, it worked perfectly well with my Mac so I don’t think it is a hardware fault. Whether this is a firmware issue that can be sorted, or just a one off remains unclear but PC users should beware.

Undoubtedly one of the more distinctive players out there and with a fairly decent price – you can pick up a 2GB version for around £75. That makes it cheaper the iPod equivalent and the healthy array of accessories and features make it even more worth the outlay. Unfortunately it is let down by slightly dodgy touchscreen system and problems establishing a connection to my Windows PC.