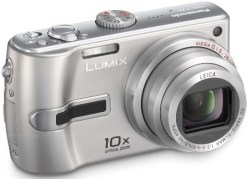 Panasonic’s wave of new digital cameras continues with the Lumix DMC-TZ2 and DMC-TZ3, both adding to their award-winning line of Lumix TZ cameras.

The LEICA DC VARIO-ELMAR lens comprises 11 elements in nine groups, including an ED (extra-low dispersion) lens and three aspherical lenses. The zoom ratio can be extended up to 15 times (13.8x on the TZ2) in 3 megapixel resolution mode with minimal deterioration. Combined with a 4x digital zoom, the camera can zoom in up to 60x (or 55x for the TM2). The camera can take pictures in any of three aspect ratios: 4:3, 3:2, or 16:9.

The camera can take up to 300 photos on a single charge, and the TZ3 allows unlimited consecutive shooting up to the 12.7MB built-in memory capacity, or that of an SD memory card. The shutter has a 0.006 second release time, and interval of around 0.5 seconds. Consecutive shots can be taken at 3fps in full resolution.

The cameras can also shoot widescreen video at a resolution of 848×480 at 30fps. The TZ3 also lets you select and display up to 9 frames from a motion shot.

They’ll be available from May, prices to be confirmed.