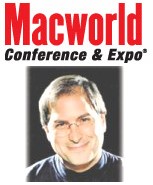 Whilst there’s plenty of CES banter going on around here, there’s another large technology show running at exactly the same time – it’s Macworld 2007.

The conference and expo will only appeal to a subsection of techies (namely Apple aficionados) but it doesn’t make it much less important, or eagerly awaited. I’ll forgo the mutterings about bad diary planning and instead let you know that you’ll find the latest news, including the much anticipated two-hour keynote speech from Steve Jobs, on Tech Digest.

With Microsoft and Sony (amongst others) pushing for control-by-Internet of your TV (amongst other things) you can be pretty sure that Steve will talk more about Apple’s iTV, as well as other consumer-friendly entertainment paraphernalia. Oh, and probably some more Macs…

Because it’s pretty busy around here already, you’ll notice we have a category all to ourselves (well, CES 2007 does, so why not?) so if you’re interested in what Apple-friendly tech developers and companies are doing, stay tuned.

The conference opens today, with the expo kicking off tomorrow. Steve Jobs takes to the stage at 9am (Pacific time) so you can expect to see it live-blogged here from around 5pm GMT.

As MacWorld put it:

As big as Macworld Expo is ’round these parts, it’s overshadowed in size and scope by CES. (Remember: sprawling, massive.) So I’m sure when people first broke out their calendars and noticed the overlap, there might have been some concern that Expo might have been shoved aside for its larger trade show counterpart. Now, just a few days ahead of Expo’s start, that doesn’t appear to be the case—at least, not anecdotally.

For starters, exhibitors are being assigned to Moscone’s North and South halls. We grizzled Macworld Expo veterans can think back to the lean years just after the Tech Bubble burst when the show was a South Hall-only affair, with wide aisles and multiple curtains to mask the emptiness. With more than 350 exhibitors on hand this year—the number is marching closer to 400, as I type this—those one-hall-only days are a distant memory.

More significant are the developers whose product lines require them to attend both Expo and CES—makers of cameras, printers, and other such peripherals. Rather than choose one show over the other, they’ll have a presence at Expo—big names like Canon, Epson, Fujitsu, Nikon, and Hewlett-Packard are on the exhibitor list for this year’s Expo.

iPod-related paraphernalia has become more prominent at recent CES shows, and this year doesn’t figure to be any different. But that doesn’t appear to be having any appreciable impact on Expo attendance for iPod accessory makers. My colleague Dan Frakes has the task of making sure that iPod-related developers are met with during Expo week, and he tells me that he has 75 to 80 exhibitors on his radar at this point.

So if you harbor any lingering concerns that Expo would wind up on the short end of the stick when it came to competing with CES for attendance, interest, and headlines, relax—Expo’s doing just fine. When the show gets started next week, Moscone Center should be brimming with attendees, exhibitors, and pundits doubtlessly proclaiming Apple’s impending demise.