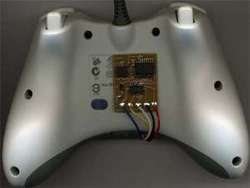 With all the hype around Nintendo’s Wii-mote and the PS3’s Sixaxis controller in recent months, poor old Xbox 360 owners would probably be feeling sorry for themselves if they weren’t waggling their trigger thumbs to stumps playing Gears Of War.

Still, one 360 owner didn’t settle for second best. Instead, he bought an accelerometer, slapped it into a 360 controller, and soldered the two together in such a way that he can now mimic one of the analog sticks simply by tilting the controller.

I can’t say I understand how it all works, even from his explanation, but he’s apparently keen to make a wireless version next, and possibly even selling it to other gamers. “I would like my projects to start becoming self-sufficient, so if you are interested in buying a 360 tilt controller or maybe just a soldered circuit board, let me know…”