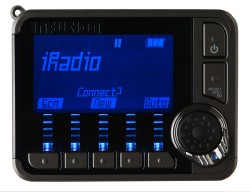 “We have a huge database of stations, but you can also add your own custom URL if there’s a station we haven’t got,” says James Hammond, engineer at Torian. “Just don’t be surprised if it then turns up a week later on the database!”

InFusion also includes an FM radio receiver, and can play MP3, AAC and OGG files stored on an SD or MMC memory card. Better still, it can also record to the memory card. Torian reckons you’ll get five hours of internet radio from a single battery charge, or eight hours listening to MP3s.

InFusion has just launched, and costs $229.99 in the US. “We’re looking at worldwide distribution at the moment,” says Hammond. “We’re getting lots of attention from distributors, and are signing deals right now. Let’s just say I’ve ordered a lot of UK power-packs…”

Meanwhile, Torian has also created a cut-down version of InFusion, called Alchera, which is designed to be incorporated into other companies’ products, including car radios, boomboxes and even TVs.