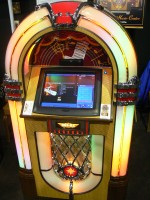 Rock-Ola may be the US’ oldest jukebox manufacturer, having made its first in 1935, but the company can’t be accused of not moving with the times. At tonight’s Digital Experience showcase before CES kicks off, the company was showing off its latest cutting-edge jukebox, the Nostalgic Music Center (pictured).

It’s got the ace retro styling you’d expect from a Rock-Ola jukebox, but inside there’s a 160GB hard drive to store up to 2,800 CDs worth of tunes, which you rip to the hard drive. There’s also a broadband connection to hook up to online databases and download artist names and the titles of songs and albums.

I had a play with the jukebox, and was most impressed by the nifty drag’n’drop interface, which makes it easy to build your own playlists. The juke can cross-fade between songs automatically, play short clips of them as previews, and has a built-in graphical EQ. Music buffs will be dribbling over this, I promise you.

Meanwhile, Rock-Ola also showed off another new jukebox, the iPod Series Jukebox. As you might guess, its innovation is an iPod dock, allowing you to play songs stored on that, as well as the CDs held in the jukebox itself, like a traditional model.

Rock-Ola told me the jukeboxes start at $7,000, but if you’ve got the money and love your music, I’d say that’s money well spent.