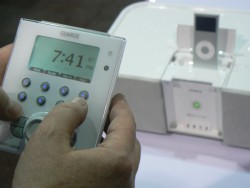 I’m all for technology being given friendly, human names. Fred, maybe, or Jim. Or George. Actually, someone’s already nabbed the name George: it’s Chestnut Hill Sound’s new 2.1 stereo system, which has a dock for your iPod, and a detachable remote control with which to navigate and play your tunes.

The remote has a proper knob on it (pardon my language) to make navigation a cinch, while its menu structure has been designed to mirror the iPod’s as much as possible, to reduce the time taken to learn how it works. The metadata from your iPod is actually downloaded into George, so it can be wirelessly sent back and forth from the main unit to the remote.

George is also an AM/FM radio, which can also be controlled using the remote, with a bunch of presets and a “best-in-class” alarm. Chestnut Hill Sound says George has been designed to be modular too, with a USB port on the back to download firmware updates and new features, plus new hardware modules. 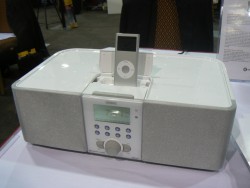 “We’ve just announced an HD radio module that’ll be available hopefully in mid-year,” chairman Rob Friedman told me. HD radio is the US equivalent of DAB, by the way. “In the future, we’ll be adding other kinds of digital audio sources, and supporting future devices that can be hooked up through our dock.”

George has just gone on sale in the US this month, for $549. Friedman says the company aims to have it on sale in Europe by the end of the year, hopefully September. And finally, it’s got some cool rawk credentials. In the months leading up to its release, George has been on tour with the Rolling Stones, being beta tested by Stones keyboardist Chuck Leavell. You’ll want to start it up etc etc…