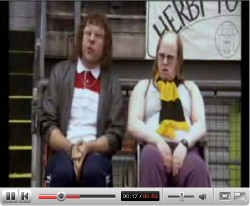 MediaGuardian is reporting that the BBC is in advanced negotiations with Google to launch a branded channel of Beeb promo clips – initially on Google Video, but possibly also YouTube at a later date.

The channel would show clips of new shows, and would possibly carry advertising as well. The deal is expected to be announced tomorrow at the World Economic Forum in Davos.