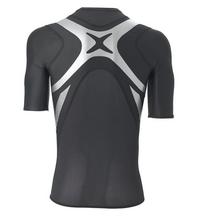 Well, Adidas has already produced TUNiT (the football boot meets technology), so why not use technology to produce a range of performance-enhancing sportswear? That’s exactly what it has done with the introduction of Techfit.

Originally developed for Olympic-grade athletes, Techfit will be coming to leading football clubs, including Chelsea and Liverpool, later this month and to retail stores for us mere mortals. It’s a multi-sport garment, scientifically proven to enhance sporting performance. Adidas claims it gives more strength, power and endurance by supporting key muscle groups and storing elastic energy for “explosive performance” during any athletic movement.

As an example, Adidas claims wearing Techfit apparel can enable an athlete who could sprint 100 metres in 10 seconds to run the same distance almost a metre quicker. It can add an average of 5.3% total body power output, increase maximum jump height by 4%, and accelerate faster sprint times (1.1%).

If you fancy a bit of that, a range of Techfit kit will be in stores from January 21st 2007, with prices starting from £48.