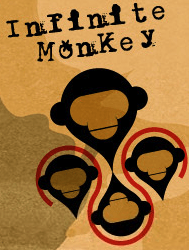 Today sees the launch of a rather unusual EP. “The Infinite Monkey Project EP” was based upon a creative project from T9, those of predictive text software fame.

Based around the principle of the classic Infinite Monkey Theorem, which states “Due to the nature of infinity, a monkey hitting keys at random on a typewriter keyboard will almost surely eventually type every book in the Bibliotheque Nationale de France” (Borel-Cantelli 1913), it asked various musicians to compose songs with lyrics made up from words sent in by the general public.

People were asked to text in words that they felt had a good chance would be included in the lyrics of a hit song. Words were collected; phrases were formed. Artists then short-listed sentences to create lyrics and a final song for download release.

Apparently anyone selecting a word that appears in the final songs is eligible for a portion of the royalties – if it becomes a hit.

In fact, several EPs have been released around Europe:

“I hope everyone likes what I’ve done with their words. I’m glad the main theme seemed to point towards communicating love and not something ruder! I really enjoyed working on this unique project” Virgil Howe aka Sparo.

“I love the idea of the Infinite Monkey Project to put random ideas of different people together to a sense. We love Chaos!” Gesa Hansen

3) Alex and Tomy – ‘Un Paraiso Salvaje’ – Representing Spain. Otherwise known as Alex Guerrero and Tomas Robles, this duo joined forces to combine their creative talent. Tomas is a producer, musician, singer and songwriter from Madrid whereas Alex is a producer, remixer and sound engineer from Seville.

“In the beginning we thought that the project was interesting enough and at the same time a bit weird. So we decided to make a track where not only random words and music ideas could have a common place to meet, but serious commercial music and personal viewpoints could reach a sweet spot to live happily and in peace with ourselves.” Alex Guerrero & Tomas Robles

“This project was certainly fun to participate in. I thought the idea to work with randomly generated sentences was pretty challenging and the final result sounds like a pretty cool little poem! As usual, I composed my music as if it was the score of a virtual movie. I want my tracks to tell a story from beginning to end, to create interesting and original electro-analogic atmospheres…” Olivier Girard

5) Sparo – ‘Dreaming’ – Representing Italy
Not one to shy away from a challenge, the multi-lingual Sparo also provided a track for his Italian fan base!

The UK EP is available to download from today at www.infinitemonkeyproject.com.