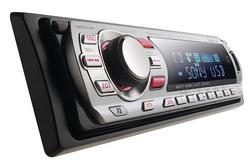 Sony has a new in-car stereo system ready to go for January – the CDX-GT610U/CDX-GT616U – making it easy to play your digital files on the go.

The system is a CD tuner / changer controller that can replay discs burned from your PC in MP3, WMA, AAC or ATRAC formats, or if you have a USB-friendly storage device, you can connect that and playback tracks in the same format. If that happens to be a Walkman, its functions can be controlled directly from the front panel or via the sub-credit card sized remote – allowing back seat drivers the potentially annoying option of choosing what’s playing in the car.

The flip-down front panel of the CDX-GT610U/CDX-GT616U also features a 13-segment fluorescent display for disc, track and station data plus EQ and other information. Digital audio reproduction should be impressive thanks to ultra-precise 24-bit D/A conversion and you’ll have plenty of power with 4 x 50W S-MOSFET output stages. It’s also claimed to be the best-sounding GT Series head unit yet, with the inclusion of BBE-MP sound processing that restores high-frequency harmonics that often get ravaged by MP3 audio files.

The Sony CDX-GT610U/GT616U will be available throughout Europe from January 2007. Pricing yet to be confirmed.