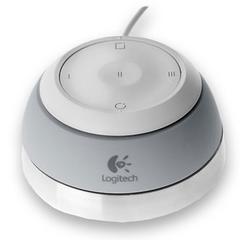 Logitech obviously thinks we’re all so busy multi-tasking these days that we need extra tools to deal with the desktop demands. Tools like the NuLOOQ navigation tool, which has just launched in the UK.

It’s designed to work together with a mouse and keyboard, acting as an extra controller for your most-accessed controls. Logitech claims it reduces the repetitive use of shortcut keys and scrolling around trying to find the right button to click. Thing is, if you use them so often, surely you’ll find them almost by default?

The NuLOOQ is designed to sit on the desk in easy reach and features a navring for easy navigation, which can offer simultaneous panning and zooming of images and documents, moving in six directions – left, right, up, down, and twist clockwise and counterclockwise. At the top of the NuLOOQ is a circular, touch-sensitive disk – the tooltuner – which can adjust tools like brushes and fonts. There’s also five programmable buttons to call up frequently used tools or commands.

It’s compatible with both Mac and PC, and will only be available from Apple online and Apple stores for £80.